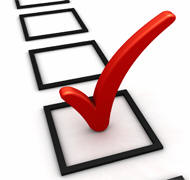 The development of secure and transparent voting systems is essential to the future of our country. NAVO, working with community members and election officials exists to aid in the effort toward solution. We would appreciate your support in this important endeavor.

Additionally, to support the new voting system infrastructure, NAVO will do training, education and development of election officials for the effective employment of technologies and management practices.

NAVO is owned by the public, organized and operated mostly by election officials, for the mutual benefit of its members, which includes individuals, voting jurisdictions, academic and research organizations, technologists, and service providers.

It is necessary, in a properly functioning democracy, that votes are counted with proper security and precision. To ensure that the will of the people is being honored and that democracy is protected we must mandate the use of the most secure and transparent voting systems available.

The importance of accurate vote counting systems was brought to the attention of the world during the 2000 United States Presidential Election. The inability of election officials to determine voter intent concerning hanging and pregnant chads led to lawsuits and public outrage and ultimately to the decertification of punch card voting systems across the United States. The federal government then passed the Help American Vote Act (HAVA) in 2002 and the voters of California approved Proposition 41 which established restrictive multilevel mandates and provided hundreds of millions of dollars for the development and use of modernized voting systems.

Recognizing that the complex and cost prohibitive regulatory environment must be changed to allow for innovation to enter the market, Senator Padilla worked with Los Angeles County to introduce and pass Senate Bill 360 in 2013. This law provided the regulatory relief necessary to pave the way for open voting systems and innovative voting system technologies to become certified for use in California.

On December 23, 2013 the National Association of Voting Officials (NAVO) was launched for the purpose of providing open voting systems for use in public elections, as well as to provide training, education, and management practices to election officials for the effective employment of open source technologies. NAVO recognized the monumental work by Open Voting Consortium and others and has embarked on a mission to create funding and resources for the certification and implementation of the most secure and least expensive voting systems.

The development of secure and transparent voting systems is essential to the future of our country. NAVO, working with community members and election officials exists to aid in the effort toward solution.